The new millennium, in which we are living, is in no kind comparable to the other precedent ones, as it has proved itself to be a rebel on all levels. Maybe its most striking characteristic, besides globalisation, is the technological advance which we have witnessed. “The technology (…) would have made Newton applaud, Tesla smile and Da Vinci giggle with glee.” (Cassela, 2010). This kind of advance aimed at making our lives easier; from GPSes, the most sophisticated satellites, smartphones to social networking sites, or at least that is what is advertised.

This present study aims to define social media in general, being a special feature of the new millennium and an example or rather a consequence of this technological advance, to see how far the use of social media has met its already set goal and that is to facilitate communication and make boundaries just a myth. So what is meant by social media?

This concept has been an umbrella term for almost all internet websites but specifically “social media are web-based communication tools that enable people to interact with each other by both sharing and consuming information”  (Nations, 2018). Indeed, the number of social networking sites has exploded and so has that is of users; reaching 3 billion people, which amounts to 40% of the world’s population. (Brown, 2018). 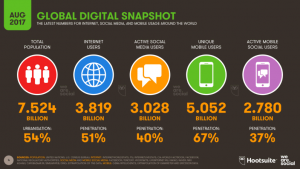